We make rollovers a breeze. From finding your old 401(k)s to helping you pick an IRA, we'll save you time, money and hassle.

Choose from top IRA providers including:

Let us know where your old 401(k) is. If you aren’t sure, tell us the name of your old employer and we’ll track it down.

We make it easy for you to compare your options and choose an IRA.

We do the heavy lifting, including any administrative work and dealing with your old 401(k) providers.

It’s free. Because we only win when you do.

We've partnered with leading brand-name IRA providers so you can choose where to roll over. We get paid by those partners when you roll over, which allows us to keep the service free for you. No matter where you decide to move your old 401(k), we'll help you do it — for free. 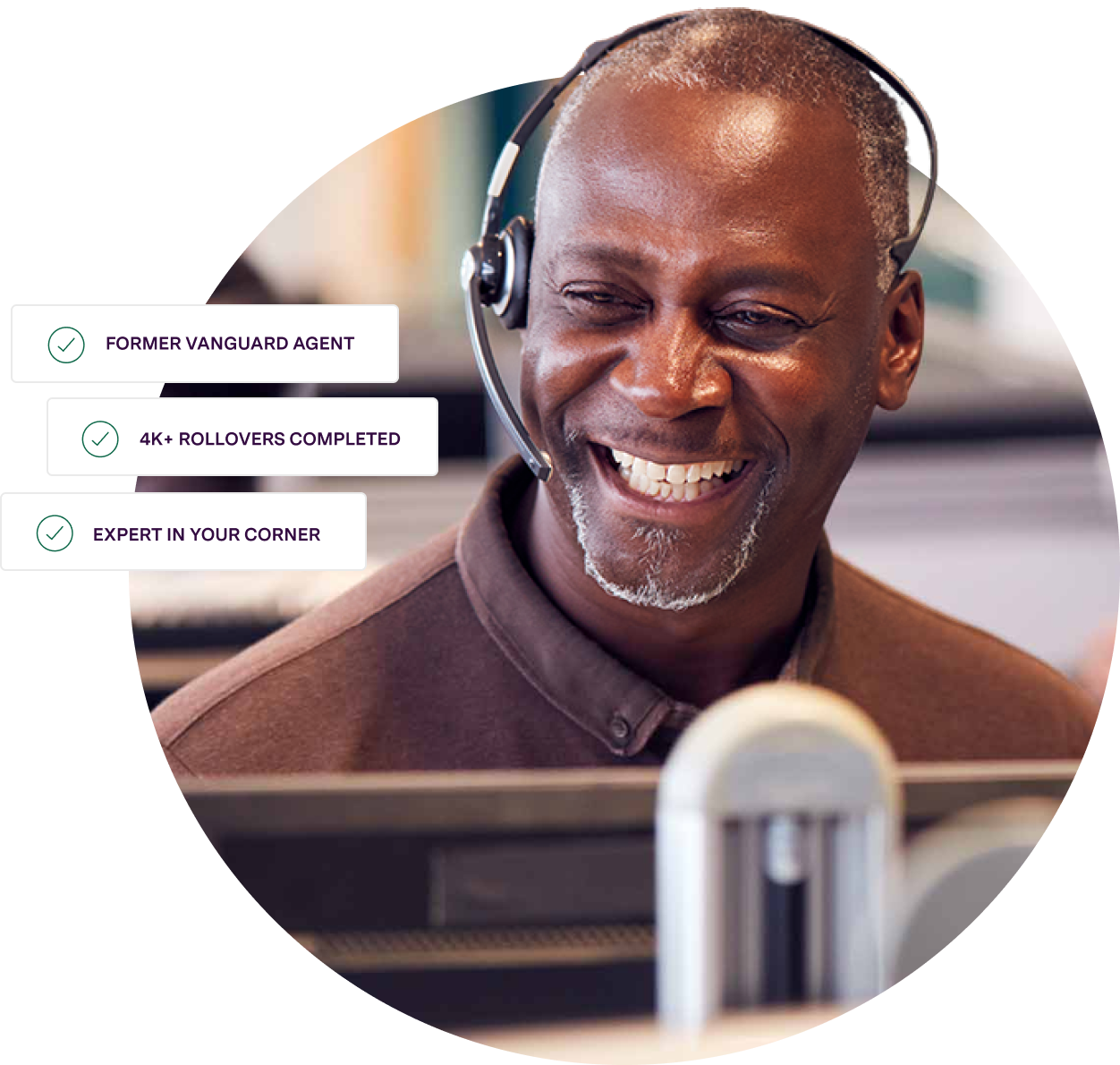 Why Roll Over Your 401(K) Using Capitalize?

Save hours of your time

Rolling over 401(k)s on your own can be time-consuming - and confusing. Our proprietary technology and experts do all the work, from finding old 401(k)s to managing your rollover.

Capitalize makes it easy for you to compare and choose an IRA based on what you care about. Time is money; now, you can save both.

Experts in your corner

Our team has tackled thousands of rollovers just like yours so you can have confidence, we'll get it right. Whether you have a traditional or Roth 401(k), we know how to get your money moved safely and tax-free.

BENEFITS OF ROLLING OVER YOUR 401(K) INTO AN IRA

Many people move their old 401(k)s into an IRA. Here’s why it can be a great choice for you too.
Get Started

An IRA is a retirement account you can open on your own. IRAs have similar tax benefits to 401(k)s but aren't tied to your employer. Most people use an IRA as a way to consolidate old 401(k) accounts in a tax-free transfer known as a "rollover". Having an IRA doesn't stop you from participating in any new or current 401(k)s you have at work.

Millions of 401(k)s get left-behind every year. Make sure yours isn’t one of them by rolling your money into an IRA - where you can easily keep track of and grow your savings no matter where your career takes you.

You never picked where your 401(k) account was held - your employer did. An IRA puts you back in the driver's seat - you pick where your money goes, and how it's invested. IRAs are generally more flexible than 401(k)s and typically have more investment options.

2 in 3 Americans don’t know what fees they’re paying in their 401(k). Selecting an IRA allows you to see your fees at the outset and make sure they’re reasonable. Keeping fees low can make a big difference to your savings at retirement.

Don’t just take our word for it.

Made the 401(k) rollover process a dream!

I dreaded having to do it because it's hassle, however Capitalize made it a simple and seamless process. I highly recommend them!.

I've been putting off my rollovers for years, but Capitalize made it SO dang easy. We did three in one quick session. Will definitely recommend it to all my friends!

They help you every step of the way and even help summarize the different IRA companies to help you choose one. I didn't have to do anything other than set up the IRA accounts and conference call to transfer funds. Capitalize took care of the rest!

Fantastic service and easy to use!!

I was recently switching jobs and found Capitalize. My new 401(k) provider wanted 15 pages, but Capitalize made the 401(k) rollover SO SIMPLE. I couldn't recommend them higher. Fantastic customer support even when I didn't understand something.

So easy and quick!

I had to move two 401(k)s from different banks to a third bank. Tom walked me through the whole process, stayed on the line to verify everything, and I received email updates and prompts along the way. Super easy and stress free. I’ve rolled over a previous 401k alone….I won’t be doing that ever again, ha.

Capitalize helped me find the best rollover IRA account for my needs and did the hard part for me by scheduling a call with my old 401K provider and arranging the check.

Blown away by this experience.

I wish everything I did was as uncomplicated as Capitalize rolling over my 401k!

This is one of those things I’ve put off for years and the team took care of it so quickly. Once you kick off the process the Capitalize team does the hard part, chases your money down and makes sure it’s all rolled over and accounted for. Highly recommend!

My wife had an old 401k from a long-ago employer listed with her maiden name and an old address we couldn't access any more. When I found out about Capitalize, I filed the request to move the money out, and it worked right away! I was frankly kind of shocked at how smooth and easy the process was

Let's get you up to speed
We're all about saving — but not when it comes to questions. Get the 411 on 401(k)s and more.
Explore all FAQs

You can count on us to protect your data.

We defend your data using bank-level encryption, so your information stays safe and secure.

We’ll guide you through the world of 401(k)s, IRAs, and rollovers to help you save for retirement.
Find your old 401(k)
Read
3 common 401(k) rollover mistakes to avoid
Read
4 reasons a 401(k) rollover is better than a withdrawal
Read
View all posts
Get Started

Start your rollover online in minutes — and we'll take it from there.